It is an agreement that several European countries have abolished checks at internal borders (between those countries) and have moved these controls at the external borders (with third countries) .The agreement, signed in the Luxembourg town of Schengen in 1985 and in force since 1995, it establishes a common space -called Schengen space through which you can freely any person who has regularly entered at an external frontier or resident in one of the countries applying the Convention. 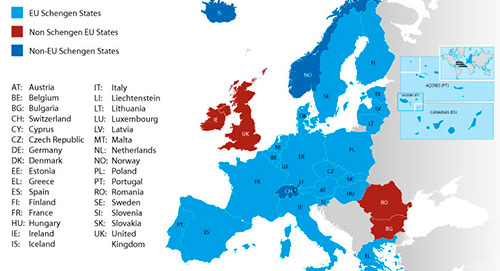 In total, the countries that are part of the Schengen area are 26:

The latter voted on February 9, 2014 by referendum, to restrict access of the citizens of Europe to their territory, which can lead to leave the Schengen area.

The aim of the Schengen agreement is the creation of an area of free movement, with the removal of common borders of the signatory countries. Through this agreement, the United abolished controls on common borders, strengthening its external borders, in order to impede illegal immigration of nationals of non-members of the European Union.

Thus, anyone with valid visa in the Schengen zone can move freely without performing border procedures at internal borders.

You can see full information in: