The football team SF LAWYERS participates in U15 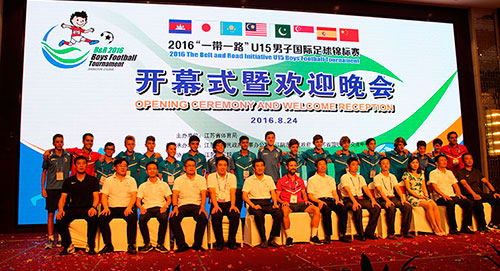 Upon receiving the invitation of the Government of Jiangsu Province, SF Lawyers organized the participation of a Spanish team to participate in this tournament.

The goal is to collaborate with the Chinese government in the strategic promotion of "Silk Road and Route Maritime Silk XXI Century" sponsored by the Central Government of China, and to convey the goals of "Communication of thoughts of People "which is part of the project.

The football tournament organized by Jiangsu Province, externalizes the desire to turn the tournament into a bridge to promote friendly relations between the Chinese people and foreigners, boost exchanges in sports and culture between countries and strengthen the will of people and society for the construction of "the Silk Road".

In this tournament they have participated eight teams from Spain, Pakistan, Kazakhstan, Cambodia, Malaysia, Japan, Singapore and China. The Spanish team, participated in the same obtaining very good results and most importantly, exchanging views and knowledge with teams from other countries.

SF LAWYERS is dedicated to promoting exchanges and collaborations between China and Spain in all respects. One of our major projects is to disseminate the experience and techniques in the field Spanish football in China. Henceforth, we continue to strive to promote trade and development of football in both countries, working with governments and organizations of China and Spain.