Leaders of member countries of the Shanghai Cooperation Organization (SCO) sealed in Astana the entry of India and Pakistan into the international body, a Sputnik correspondent reported.

The presidents of China, Kazakhstan, Kyrgyzstan, Russia, Tajikistan and Uzbekistan signed the document setting out the decision to end the process of entry of India and Pakistan, countries which, as of June 9th, become permanent members of the OCS. 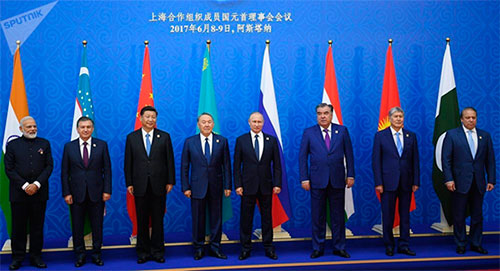 The memorandums of entry into the organization of India and Pakistan were agreed a year earlier, in June 2016.

The OCS also has the participation of Afghanistan, Belarus, Iran and Mongolia as observers and of Armenia, Azerbaijan, Cambodia, Nepal, Turkey and Sri Lanka as dialogue partners.

The OCS, formed in 2001, aims to strengthen security and economic and cultural cooperation in the region

In addition, the countries of the OCS have signed a convention against extremism at the summit of the Kazakh capital.

The presidents of China, Kazakhstan, Kyrgyzstan, Russia, Tajikistan and Uzbekistan signed their signature at the bottom of the document.

The leaders also approved a statement on the joint fight against international terrorism.