Philip VI and Chinese President Xi Jinping expressed their desire to further improve the strategic relationship between the two countries for more than a decade and to extend cooperation in different fields from "mutual respect". 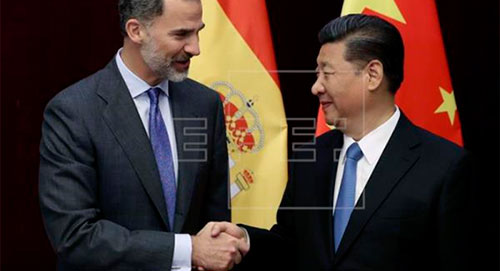 The King met today with Xi in a hotel in Astana on his arrival in the capital of Kazakhstan to participate this afternoon in the opening of the international exhibition, entitled "Energy of the future" along with several foreign leaders.

In his first meeting with the Chinese president since his proclamation as king in June 2014, Don Felipe invited him to travel to Spain "in the near future" to strengthen the exchange of high-level visits.

"We would like, in the bilateral section, to have a great launch of this strategic relationship that we established a few years ago," Felipe VI said in the brief speech at the beginning of the meeting, which lasted for about 40 minutes.

Xi said that he attaches "great importance" to the relationship with Spain, so he was willing to work together with the King to "raise the comprehensive strategic partnership to a higher level to greater benefit of the two countries and their peoples."

This is the first time that the King meets Xi, although both met in August 2008, as Prince and Chinese Vice President, respectively, during the opening of the Beijing Olympic Games.

Accompanied by Foreign Minister Alfonso Dastis, the Spanish monarch stressed that the relationship with the Asian country is based on "mutual respect, affection and admiration."

"For me, it is a privilege to have this opportunity to meet us at this moment ... It allows me to highlight the fruitful trajectory of relationships that we have had over the last few years," Felipe VI congratulated.

In their view, it has been a "constant" in both governments to "work to contribute to the greater well-being of peoples and to increase the level and quality of trade, political and cultural exchanges."

Mr Felipe welcomed the outcome of the EU-China summit last day on which they vindicated themselves as strong advocates of climate change agreements after US President Donald Trump announced the decision to Withdraw his country from the pact signed in Paris.

The summit between the EU and China highlighted "very positive signs of steps forward in terms of greater confidence, greater transparency and greater openness," according to the Spanish head of state, who recalled that Spain is "very in line" with politics European level.

Don Felipe expressed the "enormous pleasure" that Xi's visit to Spain would entail once the 19th Congress of the Communist Party of China (CCP) was held in the autumn.

The Chinese leader, who has been in charge of the Asian power since 2013, praised the "relevant" role that the Spanish Royal Family has always played in order to firmly promote good friendship between the two countries.

After conveying his "cordial greetings and best wishes" to King Juan Carlos, Xi valued that "mutual trust in the political, with fruitful results" in bilateral cooperation is becoming more and more consolidated.

The communist leader recalled the brief stopover that he made last November in Gran Canaria, where he met with the Vice-President of the Government, Soraya Sáenz de Santamaría.

"It is a very beautiful place that left me gratefully impressed by the ancient history, the fascinating culture and the picturesque landscapes. We are countries of ancient civilizations," said Xi.

The meeting between Don Felipe and Xi continues the high level contacts maintained in recent months, which have underpinned the good political and economic harmony between the two countries.

The head of the Spanish government, Mariano Rajoy, met with the Chinese president on May 13 in Beijing on the occasion of the economic forum on the New Silk Road promoted by the communist regime to promote infrastructure projects in this connection between Asia and Europe.

Rajoy also met with Xi at the G20 summit held in the Chinese city of Hangzhou in September last year.

On both occasions, and as the King did today, the head of the Executive encouraged the Communist leader to travel Spain and the latter, in turn, extended an invitation to Philip VI to visit Beijing.

The appointment with the Chinese president is the most detailed meeting that Don Felipe will hold during his stay in Kazakhstan, with the president, Nursultan Nazarbáyev, being seen Saturday in the presidential palace in Astana.

This afternoon, the King will meet with UN Secretary-General António Guterres and Uzbekistan's President Shavkat Mirziyoyev, another of the Central Asian countries in which Spain has business interests.

On the occasion of the inauguration of the Expo of Astana, about fifteen heads of State and Government have moved to the capital of the Soviet ex-republic.

Among them is Russian President Vladimir Putin, with whom Don Felipe has not seen since he was king, although they have talked on several occasions, and the Indian Prime Minister, Narendra Modi, with whom he met last week in Madrid.